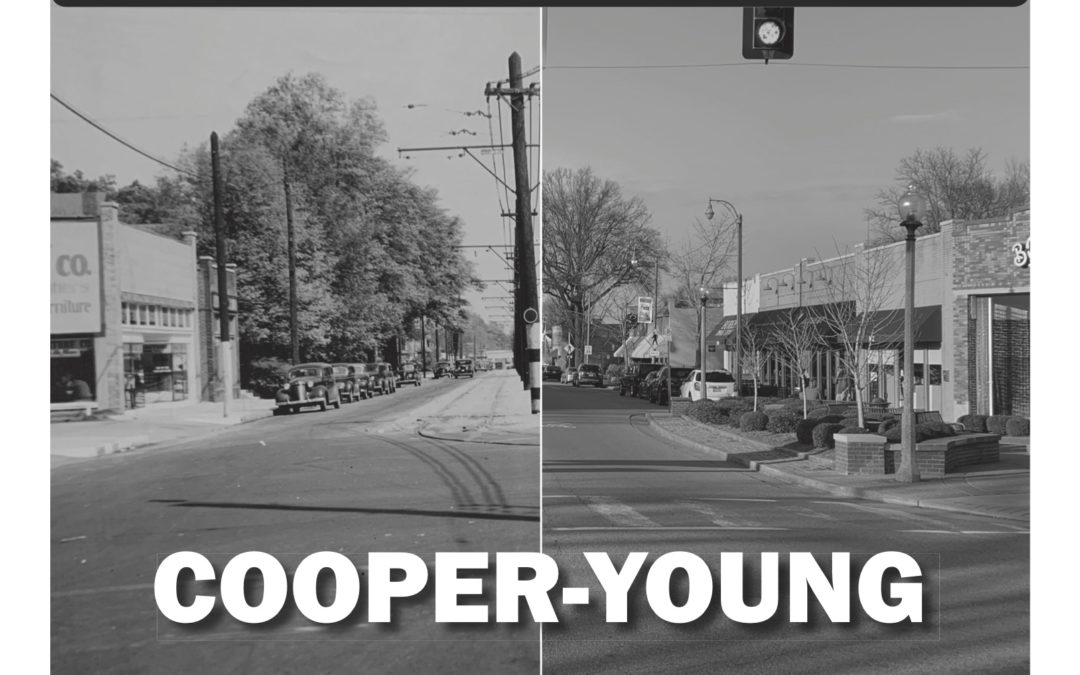 Do you ever wonder about the history of your house or various buildings in Cooper-Young? Have you seen various dates cited for the year your house was built? I certainly have, and the inconsistencies made me interested in finding out the true history.

To dive into the history of Memphis, the main branch of the Memphis Public Library (Benjamin L. Hooks Central Library) is one of the great resources available to you. Located on the fourth floor and online at the Dig Memphis digital archives (www.memphislibrary.org/digmemphis/), the library’s Memphis and Shelby County Room holds a collection of historic pictures of Memphis and also houses a collection of the “Polk’s Memphis City Directory,” which was published by the R.L. Polk & Company. Polk started publishing city directories in 1872 and quickly expanded to cover cities across the country. Each city directory contains a list of all businesses and residents first arranged by name and then arranged by address. This second format allows one to look up a specific address such as your house and see who lived there or what business was located there. In the older versions of the directory, it is common to see the occupation of the person who lived at a given address also. The directories also served as an early form of “Yellow Pages” where one could find businesses arranged by categories such as insurance, furniture, groceries, etc. Finally, the pages are filled with advertisements for local businesses, which I always find interesting. The city directories at the central library span from the late 1800s to 1960 and are archived on microfilm, which also serves as an interesting relic of the past.

On a recent trip to the library, I decided to check out the collection of streetscape photos, which are categorized by street name. Unfortunately, my search for both Cooper St. and Young Ave. only turned up four photos from Cooper — two from Cooper-Young and two from Overton Square. One of the photos from Cooper-Young was looking north up Cooper from the intersection with Young and was taken in 1945. For comparison, I took a photo of the same streetscape today. In 1945, the most noticeable difference from then to now was the presence of the poles and power lines down the middle of the street. This infrastructure was for the Number 2 or fairgrounds route of the Memphis Street Railway Company, which came south down Cooper from Overton Square, turned east on Young Ave. to the fairgrounds and proceed south down East Parkway. The buildings in this picture are all still here today. On the far right, you can see the building that currently houses Buff City Soap followed by (right to left) Jay Etkin Gallery, Alchemy, Burke’s Book Store, a gap in the buildings, and then Tsunami. On the left, you can see the buildings that currently house Sweet Grass/Next Door as well as the House of Mews.

Using the city directories, I decided to dive into the history of 935-937 Cooper, which contained Romar Furniture Company in the pictures from 1945 and is the building that is Sweet Grass/Next Door today. Comparing the photos from 1945 and 2020 shows that the façade of the building has been altered with a stucco finish and new details such as the central arch across the front. Searching through the city directories in the early 1900s indicated that this building does not appear until 1924 and has been split into three separate businesses (935, 936 and 937 S Cooper St) for most of its history. In 1924, Ellis Variety Store was listed at 935 Cooper. At 936 Cooper, Krouse Baking No 2 and Lilly Cash Market No 2 seemed to share the space. Beaty Brothers Furniture Company was listed at 937 Cooper and remained there until at least 1943 just before this photo was taken. By 1925, Ellis Variety Store had disappeared from 935 Cooper, and Clarence Saunders Store No 4 had taken its place. Krouse Baking and Lilly Cash Market had also left the center spot in the building (936 Cooper) to be replaced by Piggly Wiggly Stores No 5.

Most of you are probably familiar with Piggly Wiggly, which was started by Clarence Saunders (who also built the Pink Palace) and was the first “true self-service grocery store” in the world and was even patented by Mr. Saunders (US Patent #1,242,872). However, I was not aware of the existence of the Clarence Saunders Stores. With some luck, I was able to find an advertisement for these stores in the business directory under “Grocers.” Based on the advertisement, it appears that the Clarence Saunders stores were proud of their low prices. Another interesting aspect of this advertisement is the strange phrase “sole owner of my name.” Wikipedia says this grocery chain was created in 1928, but the listing for this store in the 1925 city directory contradicts this date. More importantly, Wikipedia says that this chain of stores was “known by the public as Sole Owner stores” and went into bankruptcy in 1930 during the Great Depression. This fact does match the history of this building because the Sole Owner store disappears after 1929, and Silver Savers Stores No 3 grocery appears at 935 Cooper in 1930. Piggly Wiggly remained at 936 Cooper until 1935 when the space was listed as “vacant” for four years. Silver Savers remained at 935 Cooper for three years before the space was listed as “vacant” in 1933 followed by Eastend Hardware Company from 1934 to 1938. In 1939, Eastend Hardware moved to 933 Cooper (now House of Mews), and Beaty Brothers Furniture expanded into the 935 space for one year. For some reason, the expansion of Beaty Brothers into that space was short-lived, and something called the Fairview Bowling Club was listed at 935 Cooper for 1940 and 1941 before Beaty Brothers moved back in from 1942 to 1943. In the center bay at 936 Cooper, Jimmie’s Sandwich Shop operated from 1941 to at least 1943. The 1944 city directory was apparently missing when I visited the library, and by 1945 (when this picture was taken) Romar Furniture Company was listed in all three bays of the building (935-937), which ended a nearly 20 year run for Beaty Brothers Furniture in that location.

Romar Furniture was apparently short-lived as well, because 1945 is the only year they are shown in that building. Starting in 1946, Johnson Furniture & Appliance Company moved into 937 Cooper and remained until at least 1960, which was the last city directory in the archives. The year 1946 also marked the shift to restaurants in the 936 Cooper space. Wilmouth Restaurant was listed in this space from 1946 to at least 1948. Johnson Furniture & Appliance briefly occupied all three spaces in the 1950 directory, but starting in 1951 the 935 space disappeared. I suspect this was due to the 935 and 936 spaces being combined and being given the address of 936 Cooper. Jo May Restaurant occupied the 936 space from 1951 to 1953 when Sam Haynes Photo Shop took over in 1954 and remained until at least 1960.

I hope you enjoyed this mini-trip through history; I certainly did. Does anyone know the history of this building from 1960 to modern day? Although we have a fairly dynamic neighborhood today, old pictures and the city directory certainly paint a picture of Cooper-Young that is filled with a larger variety of businesses that ranged from groceries, drug stores, furniture, bakeries, photography, and even a bowling club! If you are interested in learning more about the rich history of Cooper-Young, the Cooper-Young Community Association commissioned and local residents wrote a fantastic book called “Cooper-Young: A Community That Works” that I highly recommend. You can find this book at the CYCA or Burke’s Book Store.

Is anything better than an ice cold Memphis Made b

We know that crime is a big concern for everyone i

TONIGHT - Our last Gazebo Grooves show, so if you'