Fate of iconic CY recycling bins up in the air 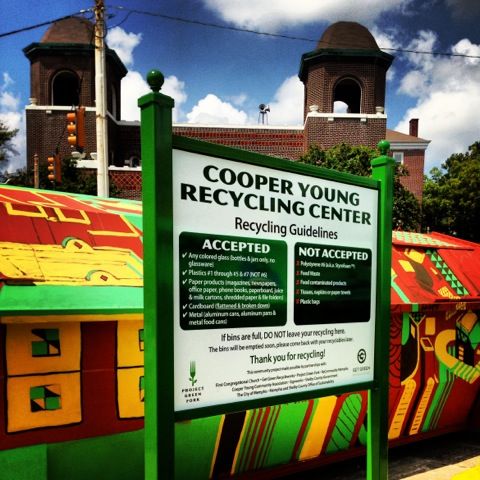 At a recent Cooper-Young Community Association meeting, the head of the city’s recycling program praised the community as leading the way in local recycling efforts.

“You all are what we call super users,” said Albert Lamar of the City of Memphis’ soild waste division. “You all set the pace for the city of Memphis.”

It is a role Cooper-Young has embraced for decades, which made it all the more distressing recently when it was revealed that the large community recycling bins located in the parking lot of First Congo Church would be removed at the end of March. A key component of the neighborhood’s recycling efforts, the bins made it convenient for the community and surrounding areas to recycle their goods in a favorable location.

Recently, though, illegal dumping — combined with falling prices and stagnant funding — have created a problem. The dumping has become an unsightly blemish, a problem that the community is looking to solve fast.

“The recycling bins have been such an eyesore for the neighborhood due to the neglect in the pickup and maintenance services they are receiving,” says Tamara Cook, executive director of the Cooper-Young Business Association. ”Others are using them for a dumping ground for old sofas, mattresses, and tires. We can’t allow our neighborhood to be a part of the blight situation that is happening in a lot of other neighborhoods in our city. Too much work has gone into this neighborhood by thousands of volunteers to go backwards now.”

The bins were first installed 13 years ago when the city was first embracing a culture of recycling. First Congregational Church arranged with the city to install a recycling drop-off center in their parking lot, one of several centers located in neighborhoods around the city, and it quickly one of the most heavily used in Memphis.

Initially, city trucks transported the bins to a plant to be emptied. Predictably, the bins became covered in graffiti and the dumping of tires and other junk became a problem, compounded when long holidays left the bins full for days. Soon, two organizations stepped up to clean up the mess — Get Green, a recyclable materials consultant and pickup agency, and Project Green Fork, the group that encourages environmentally-friendly practices among area restaurants.

“We knew that the city truck drivers were already stretched pretty thin, and there wasn’t a good way of communicating when the bins needed attention ,” says Madeleine Edwards, creator and owner of Get Green. “

Project Green Fork and Get Green, with the approval of First Congo, raised money for new roll-off containers and decorated them with artwork by local artists. They then arranged with recycling company ReCommunity to transport the bins to their local plant so the city could put resources toward the other recycling centers around the city.

The Shelby County Office of Sustainability helped get a grant for the new bins, and Urban Arts Commission organized the artwork project, while many generous supporters gave to a crowdfunding site. With Get Green’s frequent monitoring of the bins, the group could adjust the pickup schedule according to the center’s needs, and graffiti and vandalism would be reduced because of the artwork.

But in recent years, the value of recycled materials has tumbled, and this has caused a domino effect for recycling centers like ReCommunity. Each haul is expensive., disincentivizing the pickup of bins that aren’t completely full. ReCommunity pulled their sponsorship as of the end of March.

“We have been extremely grateful to ReCommunity for sponsoring the center for the last several years,” says Edwards. “However, they are no longer able to justify the increasing cost of doing so with the market as it is and the cost of the hauls increasing.”

As the number of hauls decreased, the bins overflowed again, becoming a blight issue. With the continuing economic development of the area, some community stakeholders are concerned that the struggles with dumping will have a deleterious impact on the neighborhood’s perception.

“First Congo has been a generous and supportive partner through the years, and their commitment to helping the area be more sustainable and progressive is extremely commendable,” Edwards says.

More challenges remain such as trying to keep contamination low while educating the public about what does and doesn’t belong in the bin.

Although the removal of the bins is disappointing, Edwards says, “the most rewarding thing has been seeing all kinds of people from all kinds of places bringing their recycling to the center. There has been a steady increase in use, and the center now averages four tons per week.”

With ReCommunity pulling support, the containers will be moved to another location by the city until a new location for the Cooper-Young has been determined. The City Solid Waste Division states that is will take around 60-90 days to relocate, update the containers with new signage, and install a camera. They have acquired some funding to upgrade the recycling centers and the Cooper-Young location will be the first to benefit. News regarding the new location and any related changes is expected in the next few months.

During this transition, your clean recyclables can be taken to the following location until the new Cooper-Young center is up and running: