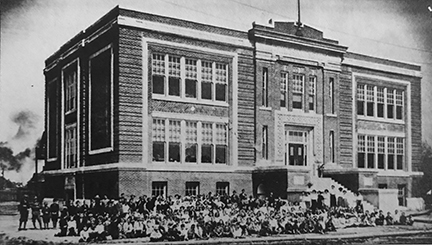 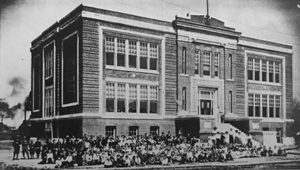 The Peabody School in 1910. The brand new neighborhood school was originally named Fleece Station School after an earlier name for the area. It was renamed soon after in honor of a donation from philanthropist George Peabody.

In the 1970s, local preservationists and authors Peggy Jemison and Virginia Dunaway embarked on a project for the Metropolitan Interfaith Association (MIFA) to document the histories of eight historic Memphis neighborhoods, including Cooper-Young. Published in 1980, their work was the first real history of the area, which at the time was in a state of decay.

In the latest in a series of excerpts from the book, this month we visit the early days of one of the neighborhood’s defining institutions, Peabody School.

After Cooper-Young’s first school, Mount Arlington, burned down and a temporary structure on East Parkway proved untenable, the third time was the charm for the neighborhood’s youth. Peabody School opened at Tanglewood and Young in 1910 and still serves the area’s students today. Before it opened its doors, the school was called Fleece Station after the name of the neighborhood at the time, but before the first school year city officials changed the name to honor London-based American philanthropist George Peabody, effectively stealing the name for a downtown school.

The second Peabody School was a whites-only school for grades 1-8. It cost a total of $2,251,944.46. A proud new building, it reflected the mores of the day. There were separate entrances for boys and girls, and each morning the pupils lined up two-by-two in front of their entrance and marched into the school which was overseen by principal Alice Conway.

Peabody School opened with 11 classrooms in 1910, added 10 more in 1921, and four more in 1926. There was an addition to the school in 1936 when a new playground was constructed. When Fairview Junior High (now the Maxine Smith STEAM Academy) opened in the fall of 1930, Peabody became an elementary school for grades 1-6.

Peabody had teachers and staff who were long remembered by its students. Miss Belle Tyus, who spoke so softly the class had to quiet to hear her, and Miss Frances Clark, who taught there many years. Also remembered was the corner policeman, Mr. Harmon, who during the 40s would help the children across the street and joke with them. He and his son lived on Blythe.

A cause célebre in the neighborhood concerned a policy of the Board of Education during the Great Depression that laid off married teachers if their husbands were employed. Mrs. Eugenia McCalla, a longtime teacher, was fired. The neighborhood signed petitions to have her re-hired, but apparently, that didn’t happen.

During World War II, the school participated in war efforts, including scrap paper drives and a system for the children to buy saving stamps weekly.