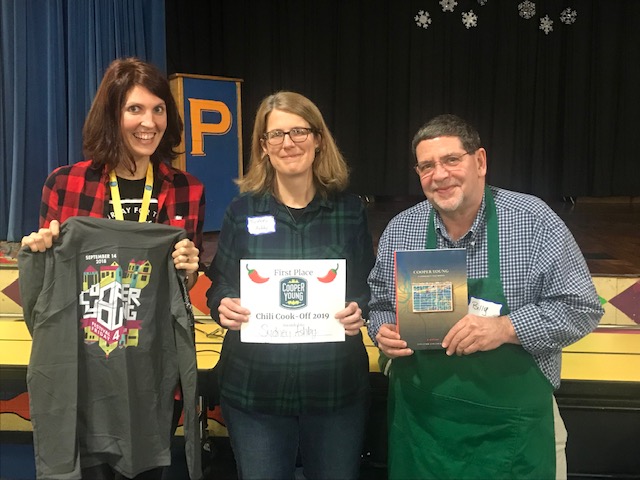 About 25 people attended the Cooper-Young/Peabody Chili Cook Off on February 15 at the school. It was a way to raise money for the Peabody parent-teacher association and showcase the historic school as well as a way to bring community members together to meet one another.

Seven volunteer chefs brought chili to the free cook off, and it was judged by six Peabody teachers. Reigning champion Sydney Ashby took home 1st place, an award certificate and two tickets to the Stax Museum of American Soul Music. Billy Seligstein won second place and a copy of the neighborhood history Cooper-Young: A Community That Works. Third Place was won by Amanda Yarbro-Dill, who received a Cooper-Young t-shirt.

Peabody principal Melanie Nelson gave a tour of the school, and Half Pints For Half Pints organizers Chris and Lurene Kelley got a chance to promote that event, another Peabody fundraiser, on March 2.

The cook off was also an opportunity for the CYCA to show off its new zero-waste initiative. (See story, next page.) Cook off organizers used compostable cups and utensils along with large jugs for lemonade and water to avoid using plastic.

The original Peabody chili cook off started in 2008 and ran until being discontinued in 2014. Original organizers Mandy Grisham and Josh Spickler say the event raised around $3,000 a year and is credited with funding the school’s Kaboom Playground.

After a five-year hiatus, Yarbro-Dill, office manager of the CYCA and a Peabody parent herself, decided it would be a great idea to bring the event back but this time as a CYCA general meeting.

“I loved the chili cook off because it was actually held at Peabody and people got to see exactly where their money was going,” she said.

Will the annual Cooper-Young/Peabody Chili Cook Off be returning? That remains to be seen, but everyone involved saw the event as a great continuation of the partnership between the two organizations.

“We had so much fun,” Grisham said of the event. “It brought back wonderful memories.” — Sheree Stubblefield