Principal For a Day 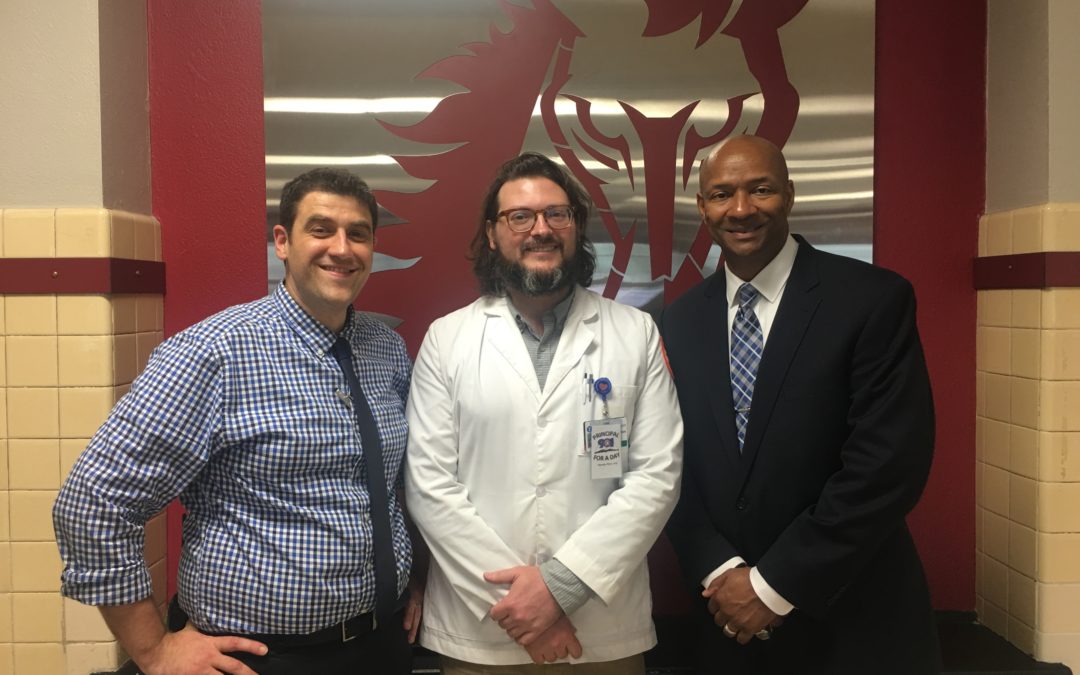 On Thursday, May 2nd, I had the honor of participating in Shelby County Schools’ Principal for a Day representing the CYCA. Each Principal for a Day met their assigned school’s principal at Bellevue Baptist for a breakfast and introduction to the program. We were entertained by amazing performances of the Cordova Jazz Band and the Cordova High School Choir while we got to know our particular school’s principal. I had the good fortune to be assigned to East High School whose principal Dr. Newman C. Robertson was extremely pleasant and welcoming. I was informed that 200 of the kids were attending a showing of Avengers as a reward for finishing their end of the year testing and would be back at school later that afternoon. We heard some brief comments from the new Superintendent, Dr. Joris Ray, where he emphasized how important having a good principal is to the health of each school and then we departed to our assigned schools.

As I walked into East High School, I was struck by how beautiful the building was. Dr. Rob, as he is known to students, faculty, and staff, informed me that they were currently undergoing major renovations in the classrooms. Installation of new whiteboards, energy efficient lighting, and a fresh coat of paint was being systematically applied throughout the building. As we walked the halls Dr. Rob informed me that they currently have around 375 students and that enrollment was expected to double by fall this year. He talked about how he focused on building relationships with his students and how they had only had one fight the entire school year. He told me that students would come to him if there was a problem and they would sit down and work it out and by the end of it everyone would realize how stupid the idea of fighting had been. Walking the halls and seeing how the kids talked with Dr. Rob I had no doubt that he was reliable resource for these students.

We made our way down to the cafeteria and I got to speak with Cooper-Young resident, Vice Principal Hernandez. We chatted about the neighborhood and the school. Since East has a science focus, I had decided to wear my UTHSC lab coat so I could talk about career opportunities in Memphis for students interested in the sciences. He was interested in learning more and I think this will be a good opportunity to introduce more students to the field of Clinical Laboratory Science.

Currently, East High School T-STEM is a dual enrollment school with some kids going through the normal classes and other kids participating in the STEM optional program. In the next few years all students at East High School will be a part of the optional school with focus on science technology, engineering, arts, and math. As East transitions to a fully optional school program students will have to apply to attend. Once accepted these students will get the benefit of amazing access to unique learning opportunities.

As the first T in T-STEM stands for transportation, Cummins Inc. has donated two full size semi-trucks as well as numerous engines for students have a hands-on diesel mechanic course. In speaking with the instructor of the one-of-a-kind class, he noted how students would have their eureka moment when an abstract concept from chemistry came to life in front of them in assembling an engine. Before I could even ask it he said that these kids would probably not see diesel engines much longer with electric trucks on the horizon but the companies wanted people with real world, hands on, mechanical experience. Walking around the various shops I was amazed at the two electric vehicles that the students had built this semester that were being prepared for their first test drive. 3D printers lined the walls of a classroom where the robotics club met. Submersible robots in various stages of design and assembly where sitting on work tables. It was a place where ideas could be hatched, prototyped, built, and put to the test.

We continued our tour with stops in the FedEx flight simulator lab, where one student was attempting to fly a helicopter. I don’t think we survived the crash. We toured the community garden and I mentioned how the CYCA is undertaking a goal of zero waste and mentioned the composting efforts of the CY’s own Compost Fairy. He was really excited by this and put me in touch with the teacher in charge of the garden. You could feel that East High School is a place where ideas are welcome and students and faculty are eager to try things and learn.

As the day came to an end, I was given the opportunity to make the announcements over the intercom. After four pages of announcements, walking multiple floors, and checking in with students and staff I was left with a whole new appreciation of what it takes to run a school. East High School has great things in its future and CY residents who are thinking about where their kids will be able to attend High School should be excited by the things that are going on there. Dr. Rob does a great job and appreciates his talented staff and his students who take ownership in their school.

Robert Hatfield is the Landmarks and Development Chair for the Cooper-Young Community Association. He enjoys taking the bus, walking and riding his bike. You can find him hanging on the porch with his dog, Sammi Jo. He is currently getting his Masters Degree from UT Health Science Center.

CYCA is an advocate for attending schools in our community.