Retail kept Cooper-Young humming with business in the 1940s 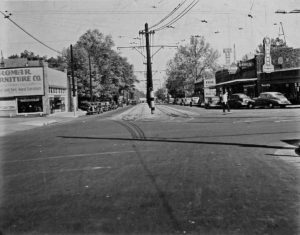 The northeast block of Cooper at Young. 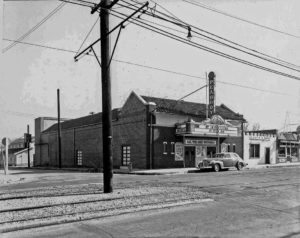 In the 1970s, local preservationists and authors Peggy Jemison and Virginia Dunaway embarked on a project for the

Metropolitan Interfaith Association (MIFA) to document the histories of eight historic Memphis neighborhoods, including Coo- per-Young. Published in 1980, their work was the first real history of the area, which at the time was in a state of decay.

In the latest in a series of excerpts from the book, this month we continue to explore some of the businesses that occupied Cooper-Young in the middle of the 20th century.

The name Rosenblum stood out in bold letters on a black sign at 944 South Cooper. Mr. and Mrs. Rosenblum operated a thriving dry goods store at that corner for almost 50 years, attracting customers from as far away as Whitehaven and White Station. They carried good lines of merchandise, both ladies’ and men’s clothing, and specialized in children’s shoes. Remembered as an extremely friendly, extroverted person, Mr. Rosenblum did a flourishing business. When he died, his wife operated the store for approximately 16 years. Declining sales, neighborhood changes, and some robberies finally forced to close the store in 1975.

Many types of retail businesses have come and gone from Cooper-Young over the years. There was the O & S Ten Cent Store, the Russell Doss Hardware Store, Harmon’s and Kelbert’s bakeries, the Dortch Jewelry Shop, Doug’s Café, Harry Jones’ Esso Station, and Walsh’s Furniture Company.

Cooper-Young has had many popular lunch spots through the years. Herman’s Café operated on Young from the 1950 until well into the ’70s.

The Peabody Theater at 878 South Cooper attracted the neighborhood young people. It was owned by John Eaton, Sr., until the 1950s when it closed and the Consolidated Wholesale Florist company moved in. The Memphis Drum Shop moved in 1991 and still occupies the building plus some.

The northwest corner of Cooper and Young, now home to a variety of businesses and offices including Bluff City Coffee and the Cooper-Young Business Association, was for most of its life a service station, originally built by the busted monopoly Standard Oil.