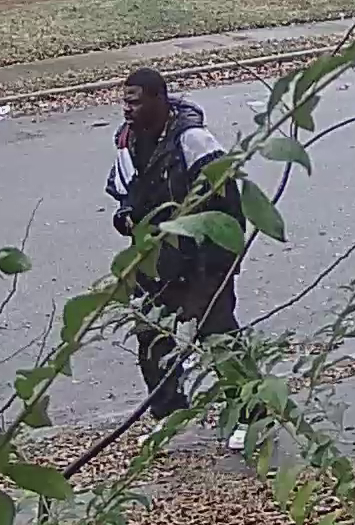 On a damp and drizzly afternoon, but otherwise in broad daylight, a large, formidable-looking man turned the corner off Southern Avenue into Cooper-Young, walking purposefully, surveying houses for potential victims. His right arm was concealed inside his blue and silver windbreaker where he firmly clutched a semi-automatic pistol against his abdomen. The man continued scouting north on Rembert, checking out houses along the way, until he came to Walker Avenue where he spotted an unsuspecting victim in a driveway. According to the victim, the man, “walked up behind me, put a gun to my head, and he told me I was going to die today and he was going to kill me.”

Fortunately, nobody died that afternoon in Cooper-Young. Aside from the terror of being threatened at gunpoint, the only thing the victim lost was his Toyota Tundra pickup truck, which the carjacker used to make his escape, speeding back the way he came, down Rembert and out onto Southern Avenue.

Unknown to the carjacker, he was photographed twice by security cameras installed and maintained by volunteers for Cooper-Young Neighborhood Watch, first as soon as he entered Cooper-Young and again as he pulled away in the victim’s stolen pickup. Within 40 minutes, volunteers had pulled the video and provided pictures to the Memphis Police Department. As a direct result of CYNW’s efforts, the police were able to quickly identify the perpetrator as Ray Charles Burns, a man with a long history of serious criminal charges that stretches back for nearly a decade.

According to court records, Burns was convicted for a 2010 carjacking on Highland Avenue. The sworn complaint alleges that he shoved his female victim into gas pumps, causing injury to her left wrist, and escaped with her Toyota Camry. Burns was sentenced to eight years, but was apparently released early. Another complaint alleges that in May 2017 Burns stole a Chevy Malibu on Harbert Avenue and led police on a high-speed chase through Midtown. He was captured hiding in tall grass in a vacant lot following a foot-chase. According to officials, the victim declined to testify. In October 2017, another sworn Complaint alleges that Burns held a victim at gunpoint at a gas station on Getwell and took her purse and Chevrolet Suburban. From there, he held up a tree crew on Reese Road, pointing his pistol and demanding their wallets. When the men attempted to flee, Burns jumped into the Suburban and chased after them. When another man approached the scene to see what was going on, Burns pointed his pistol at him and demanded his wallet. Officers pursued with blue lights and sirens, but Burns evaded them for 12 minutes before ditching the Suburban at Oliver Avenue and East Parkway, leading police on a foot-chase until he was apprehended hiding behind a house on Bruce Street. A Smith & Wesson semi-automatic handgun was located in the Suburban which had been reported stolen in an auto burglary on Cherry two days before. Somehow, Burns managed to get released. On December 20, 2017, he was allegedly involved in the Rembert carjacking. Then on Christmas Day Burns allegedly went on another spree that included carjacking and even kidnapping, leading police on a chase until he was apprehended in Arlington. He is now locked up and facing a slew of state felony charges. The United States Attorney has also indicated that they may pursue federal charges.

While perhaps the most dramatic, this is far from the only success story for Cooper-Young Neighborhood Watch. CYNW now has dozens of cameras randomly located at strategic spots around the neighborhood. In October 2017, we captured video of a Nissan Murano used as the getaway vehicle in an attempted carjacking on Nelson Avenue where the perpetrators shot into the victim’s vehicle. In November 2017, we captured video of the car used when two armed robbers walked up onto a front porch on York Avenue and pointed a shotgun at two ladies, demanding their purses and cell phones. In both cases CYNW video helped police confirm the identity of the perpetrators.

Also in November of 2017, CYNW caught video of a man stealing a van on Tanglewood and a Toyota Yaris involved in an armed robbery on S. Cox. In December we caught video of a white van used to steal wheels off a car on Philadelphia. In January, CYNW caught video of two men burglarizing cars behind First Congo and an older model black Ford pickup truck making a getaway with a stolen utility trailer. CYNW also delivered video to police of the Kia Optima used by the flasher that has been following women, asking for directions, and then filming their reactions as he drops his pants and fondles himself. CYNW has provided all these videos to police, and it is helping them to produce better results. We are also working to maintain a steady media presence by granting interviews with local news stations that will hopefully place bad actors on notice of our camera program, to act as a deterrent so they will stop coming to Cooper-Young to commit crimes in the first place. The message we are trying to send out is, “Do not come to Cooper Young to commit crime!”

CYNW made tremendous progress in 2017. We installed all of the cameras purchased with the grant money from the City of Memphis. We passed a set of formal bylaws, creating a formal structure and decision-making process. The current Board of Directors consists of Jason Whitworth (President), Michael Cairo (VP/Treasurer), Jonathan Tutor (Secretary), Coy Schnadelbach, Sharon Johnson, and Jake Williams. The bylaws established clear rules for handling funds and equipment and accounting for all expenditures. We have filed a corporate charter and are currently in the process of applying for nonprofit status with the IRS to assist with fundraising.

Cooper-Young has been divided into six new zones for the purpose of applying for new grants from the City of Memphis. We have filled four out of six zone coordinator positions, but we still need leaders for zones C-D. The next step is for each zone coordinator to hold meetings for respective zones where a representative from the grant program will come and provide training and certify the new zones. Then new grant applications are due in May.

So much has already been done, and yet there is so much more to do. Summer is coming. With summer break and warmer weather, crime will return to higher levels. We’re already seeing an up-tick in home invasion burglaries, three in the last week. Cooper-Young has seen a dramatic escalation in crimes against business properties over prior years. CYNW is currently out of funding, and volunteers are dipping into our own pockets to keep the cameras functioning. In order to continue our work, we need additional funding and fresh volunteers. You can help by throwing block parties, recruiting volunteers, writing grant applications, fundraising, installing and maintaining cameras, or helping to review video when crimes occur. All of this is very time-consuming. Sometimes there are hours of video that need to be watched.

Please make plans to attend our next general membership meeting at Memphis Made Brewery on Wednesday, March 14, 2018. We will have a social gathering at 6:30 p.m. and start the meeting at 7 p.m. Otherwise, you can email us at cooperyoungneighborhoodwatch@gmail.com.

We anticipate having a formal fundraiser in the future, but we are in immediate need of financial assistance for supplies. If you’re too busy to volunteer but would like to make a financial contribution, then please hit our tip jar at https://www.gofundme.com/cooperyoungwatch. Thank you for your continued support as we try to help make Cooper Young a safer place to live and raise your families.

Jason G. Whitworth is an attorney living in Cooper-Young and the president of the Cooper-Young Neighborhood Watch.

The CYCA is excited to bring back one of our most

Right now in the First Congo parking lot -- the we

Are y'all ready for another Wine and Walk? Join ou